If you’re looking for ways to entertain in your backyard, a set of giant dice goes a long way. You can use the yard dice in thousands of ways in outdoor settings, be it a backyard or a beach. Also, most of the games are suitable for all ages.

Join us as we reveal all yard dice games you can try out with your family and friends. All of them require a few yard dice, enough yard space, and a piece of paper to keep score. 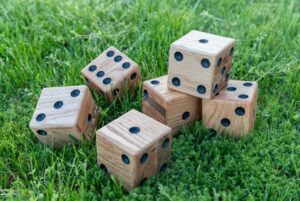 Keep note of the number of dice required to play the game, and the number of players required. Most of the games require at least two players, but there are a few that mandate at least 3 players.

Clicking the “green button” in the below table will take you to the best option available for the game. If a unique package is not available, I have selected the 2nd best alternative on the online market.

Yahtzee, or in this case, Yardzee, is a dice game in which the main objective is to score points by rolling five dice and meet certain combinations, like in poker. It requires at least two players, a set of yard dice, and wide outdoor space.

The players start the game by rolling three yard dice each. If they don’t make any combination at the first roll, they choose to keep one of the dice and re-roll the other two. Each player can roll the dice up to three times in a turn so as to make several scoring combinations while dice remain in the box. There are thirteen turns in each game and thirteen boxes divided into upper and lower sections.

Whether you’ll complete Yahtzee or not depends on whether a particular one is required or any Yahtzee.

There are six boxes in the upper section, where you determine the score by adding up all the dice of a certain number.

For instance, if in one round a player makes a combination of three aces, and numbers 2 and 3, they score 3. With that said, when the total score of a player is at least 63 in these six boxes, they add a bonus of 35 to the upper section score.

The lower section contains a number of poker-like categories, where you score if you meet some of the following combinations:

Pig is a dice game suitable for any age and is played with a single six-sided die. It requires no more than a few feet of grass in your backyard, at least two players, and a piece of paper to keep track of the score. The objective of this game is to score at least 100 points from all die rolls and the first player who does so is the winner.

The game is played in such a way that each player takes a turn to roll the die. The rules are the following:

To make the game even more fun for the adults, you can include some beverages as well. For instance, the player who rolls a 1, takes a drink.

Twenty-one is a simpler version of the card game Blackjack, which is played with a single die and by two or more players. In order to win the game, a player must score a total of 21 or close to it, but not go over.

Firstly, each player rolls the die. The one who gets the highest number goes first. The player starts the game by rolling the die as many times as they want, adding up the numbers they get.

The aim is to score a total of 21 or as near as possible to it. When the player scores over 21, they’re bust and are out of the game. Once all the players take their turn, the player, whose total is highest and nearest to 21, wins.  In the case of a tie, the players continue by taking an extra turn. They re-roll the die, aiming to score under 21 once again.

To play Twenty-one, you need a yard die, small yard space, and something to keep score. You can play it with stakes, as well. At the start of the game, each player puts a unit in a pot. When a player busts, they put an additional unit in there. The player who wins the game takes the pot. In the case of a tie, the players can divide it equally among themselves instead of playing an extra round.

Going to Boston requires three yard dice and three or more people. Before the start of the game, the players decide on how many rounds they’re going to play. The main objective of the game is to win as many rounds as possible.

The directions are the following:

This game is suitable for both kids and adults. If you include beverages in the adult version of the game, the rules are – when you don’t win the round, you drink. For kids, on the other hand, you can include some sweeteners, which is the prize for the one who wins the round.

Ship, Captain, and Crew is a dice game, which is played with five dice and by two or more people. In this case, you need a set of giant dice and not-that-small yard space available.

The object of the game is to roll a 6 (the “ship”), 5 (the “captain”), and 4 (the “crew”) with three dice, and get the highest score with the other two. Alternatively, the 4 is sometimes called the “Mate”, and the other two dice are the “Crew”.

Before the start, each player rolls three dice. The one that scores the highest total goes first. Also, the players agree on the number of rounds they’re going to play.

After a player has rolled a 6, 5, and 4 in order, the remaining two dice are the “cargo”, which determine the score of the player for that round. If a 6, 5, and 4 aren’t rolled in order on a player’s turn, they don’t score for that turn. If players tie for the highest amount of “cargo”, they take an additional turn. The one with the highest score wins the game.

If played as a drinking game, all the players except the winner must drink.

Snake Eyes is a fun yard dice game that requires a set of yard dice, a rope, and at least two players.

Start the game by making a ring on the ground with the rope, around 3 feet in diameter. Now, all the players need to throw all six dice, one at a time, into the ring, standing on a previously established line around 10 feet back. They can divide into teams as well.

For each die that landed in the circle, the player or team adds up the value shown on each to get the total score. The first one who reaches 21 or throws all 1s is the winner.

Double Whammy is a drinking dice game that requires two dice, three or more players, and shots. The main objective is to roll numbers that won’t result in you needing to take a drink.

As this is a drinking game, make sure to consume responsibly. Also, don’t drive after.

Each player rolls the dice. You’ll be required to take a drink if you score anything that:

When you roll double 3s or 6s, you’re penalized twice – a double whammy, because you’ve scored something that adds up to 6, as well as something that has a 6 in it. In this case, you take six drinks.

The player continues rolling until they get something that doesn’t require drinking, like 1-2, 1-4, and so on. Then, they pass the dice to the next player.

Farkle is a popular yard dice game, which is played by two or more players and a set of giant dice. Besides, a piece of paper is required for keeping score.

Each player rolls the yard dice and aims to reach a winning total, which is usually 10,000 points. The player who starts the game rolls all six dice at once. After each throw, they must set aside one or more dice. At this point, the player can either bank the accumulated score and end their turn, or throw the remaining dice.

If the player scores all six dice, they have “hot dice”, and can continue by throwing all of them once again. On the other hand, if they don’t score with any dice, they have “farkled” and lose all the points they have scored in that turn.

So you count your points, you should reach at least 500 in a single round. Take a look at the following scores for single dice or combinations of dice:

🎲 What are yard dice?

Yard dice are hand-sized dice, with which you can play a wide variety of games in an outdoor setting. Just like the regular dice, the giant ones come in a set of six. Therefore, you need only a set of yard dice and enough outdoor space to play any dice-based game.

🎉 What games do you play with yard dice?

Any game that can be played with regular dice can be played with the giant ones as well, except that you need available outdoor space for the latter. Some of the most popular yard dice games to try out are Yahtzee, Farkle, Going to Boston, Twenty One, Double Whammy, and many more.

🔢 How many dice do I need to play a yard dice game?

While some yard dice games can be played with a single six-sided yard die, the others require a whole set of six dice. However, the list of yard games you can play is long, so you can choose whichever works for you best.