Home » Pest Control » How Do You Know When All the Mice Are Gone? – Mice Infestation 101

How Do You Know When All the Mice Are Gone? – Mice Infestation 101

To dispose of the mice in your house, you should realize that they’d invaded your home in the first place. Of course, it might not be as easy as it seems to be. They’re nocturnal creatures that roam around your house cautiously. So if you don’t actually see one, it might take time before you become aware of the problem you’re facing.

Here, we’re going to discuss how you can identify whether you have a mouse infestation, what are the signs of one, and how to check if all the mice are gone. It’s a long read, but it’s definitely worth it if you are experiencing problems with mice, or at the very least, you suspect that you have fallen victim to some. 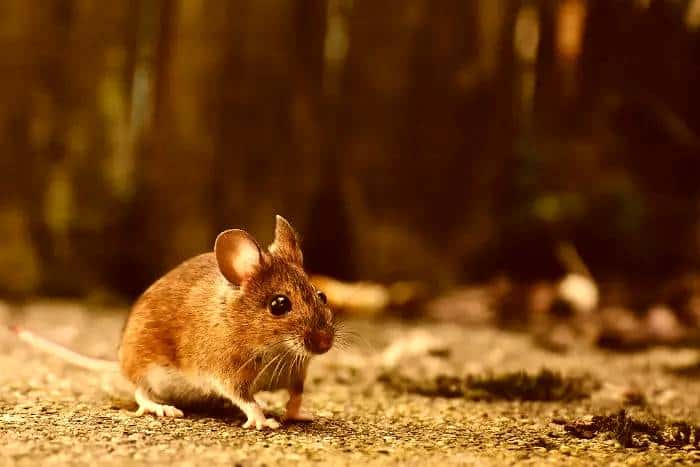 What is a Mice Infestation?

An infestation represents an unusually large amount of animals of any kind, including rodents and insects, among any other pest you can think of. Based on this, a mice infestation is a high number of mice. Even if they are not doing any damage, and there’s no sign of diseases, it’s only a matter of time before that becomes the case. If there are a male and a female mouse, it won’t take long before it turns into an infestation.

Does ONE Mouse Mean an Infestation?

One mouse certainly doesn’t mean an infestation. But, this isn’t Tom & Jerry, where only one tiny, cute mouse lives inside the hole and only bothers the cat. If one is already there, you can be sure that there are more! Or will be. And they won’t cause problems to the cat, but to you.

Once the mouse finds a way inside your house, the others will get there, too. What’s more, they multiply like crazy, so they can go from being unnoticeable to causing a total infestation at warp speed. So, if you notice any signs, act immediately, before it’s too late.

However, even if you might not see, smell, or hear the rodents when they’re already there, the droppings they leave behind, or the holes they make will give away an infestation. Therefore, if you notice signs of mice activity, take matters into your hands before the damage is done.

Do You have a Mouse Infestation in Your Home?

Establishing whether you have an infestation in your home is as easy as it sounds, to a certain degree. If you have always had a tidy home, it’s that much easier. On the other hand, if it’s a mess, or it’s a “high-maintenance” place, it might take longer to come to a conclusion.

The most obvious sign is seeing a mouse indoors. Don’t fool yourself by thinking “it’s just one mouse”, this is a sign for concern. There could be way more mice, that are just better at hiding. And again, because they are nocturnal animals, spotting is harder than it seems to many of you.

Squealing, that’s the best and simplest way to describe the noise mice make. However, even if they don’t “squeal”, if it’s quiet, you can hear their footsteps almost. You can hear them knocking on the rooftop, usually. They are not trying to be subtle, believe me.

Although not immediate, this is the sign that will trigger you, wanting to get rid of any rodents in general, not just mice. The longer it takes for you to deal with this, or the longer it takes to become aware of the situation, the worse it gets. It’s the mice feces and their pee that smell so bad. It’s them, also, that spread diseases. They are a breeding place for bacteria.

Now, like any other animal, mice also leave traces behind. They are greasy, after all. There’s nothing else like it. All the dirt, the grease that’s on them, will be left behind. The longer they are in your home, the more traces there will be. Some people call them markings, and the process is called smearing.

Mice can enter your home via open doors, open windows, or via big enough cracks in the wall. Alternatively, they can make their own way in. It’s not Tom & Jerry like, as they can damage wiring in the process. In addition, it just doesn’t look nice to have a crack in the wall. If one mouse passed through it, more will follow! Seeing holes of this kind is a strong indicator that you might be dealing with a mice infestation. 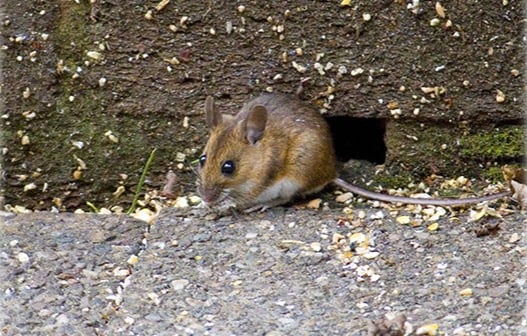 How long does it take a mouse to chew through a wall?

It depends on the type of wall you have. Moreover, it depends on the access to water and food they have. If the mice are thirsty, and they are looking for water, they will chew through it faster. In short, and in general, it takes between a couple of days and two weeks for the mice to chew through the wall.

Seeing is believing, there’s just no way around it. However, you have to know how mouse feces look like in the first place. For many, this is the better way of finding out that there are mice in the house, as opposed to seeing the mice with their own eyes. I, personally, think it’s better to see the mouse.

Below, you can see a good example of rat poop vs. mouse poop. Both of them are like pellets. 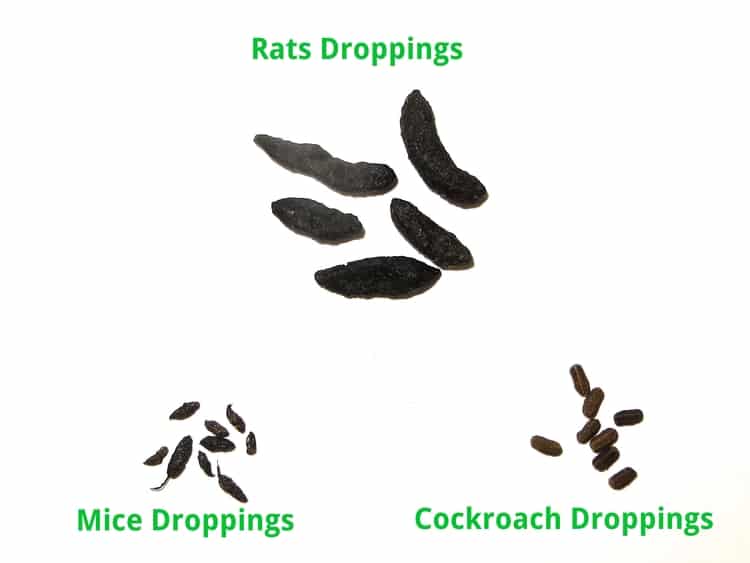 Fresh mouse droppings are shiny and are rather soft. Over time, they get dry and become hard. The dimensions can vary, but they are in the range of 1/4 to an 1/8 inch. A mouse can deposit between 50 and 100 droppings per day. Over a year, that amounts to a big number.

Rat droppings are larger in size than mouse poop, in the range of 1/4 to 1/2 an inch. The blacker the dropping, the fresher it is. They deposit fewer droppings per day compared to mice, up to 50 only.

Test to Confirm if All Mice Are Gone

Now, these two tests will not only show whether all mice are gone, but they will also show what are you dealing with, meaning if it’s mice or rats. It doesn’t take long for them to work. Just give them a couple of days, and in no time, you will get some intelligence about what type of “invaders” you’re dealing with.

Flour on the Floor Around the Bait

Once you’re sure the rodents have invaded your home, to determine the level of infestation, their size, and the actual place where they reside, try the flour test.

Firstly, place some bait, such as peanuts or oats, overnight on the floor in areas where you suspect mice activity, usually in the dark, warm places, or near food sources. Then, spread some flour around it. They’ll be tempted to come to the bait, and they’ll leave tracks of their footprints on the dusty surface. If they’re around  ½ centimeter in size, and look like little dots, it’s mice infestation you’re dealing with. Footprints twice as big than that indicate that it’s rats that have invaded your home. 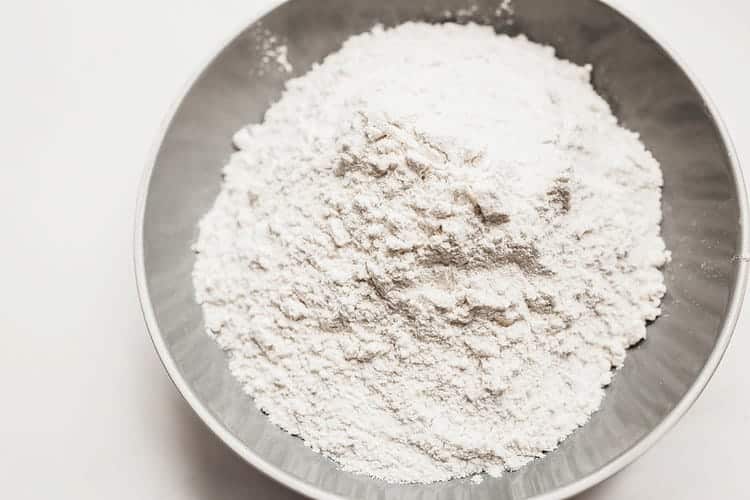 It’s surprising how different mice are from rats. Double down by putting a whole biscuit, surrounded by flour, and see what happens.

The rodents, such as mice and rats, are in constant search for food and shelter, all of which they can find in your home, so it becomes their new residence. Although they might look like little, harmless creatures, the pests can become a real threat to both your health and property. Imagine going up into the attic and the first thing that comes to you is the odor of the rodent urine. Or, mice droppings in your kitchen, which certainly isn’t a sight you want to see.

But, it’s not just an unpleasing sight and smells the critters expose you to. Once they get inside the house, they bring thousands of dangers with them. For instance, your house is at risk of fire caused by the rodents gnawing through electrical cables. Also, they’ll chew anything that might be useful in building their nests. They’ll even build the nests in any place they find suitable for them to reside.

Speaking of diseases and viruses the rodents spread, take a look at the following list of just a few of them.

Mice Won’t Disappear by Themselves!

Once you’re dealing with mice infestation, it’s up to you whether they’ll be gone for good, or will remain inside the house and call your home theirs. But, the latter one isn’t really an option, is it? Therefore, a cat can be a good alternative against these uninvited guests. However, if you want the mice not entering your house in the first place, an ultrasonic mouse repeller is a much better alternative, such as the TBI Pro Ultrasonic Pest Repeller. It is a humane way of dealing with current and potential pest infestations.

So, how do you know when all the mice are gone? If you don’t notice any signs of mice activity after you’ve taken all the necessary measures to get rid of them, they’re most certainly gone. If you’re not sure whether the war is finally over once and for all, go with the bait and flour once again. Also, check for nests in any place the rodents would hide. If you’re still not sure, call a professional that will have your home thoroughly examined.

Finally, to prevent the rodents from invading your house all over again, make sure you seal all the holes and cracks around your house, however small they might seem. Even the slightest opening can be a potential entrance for these critters, which are constantly looking for a warm place and food. Sanitize the entire house to make sure it’s free from all the debris. Keep the food in airtight gnaw-proof containers. Even now, you can be sure that you’ll keep the pests at bay.

Without you doing anything, once they get inside, the mice won’t disappear by themselves for sure. Their population will grow even more instead, and you’ll be dealing with a full-blown infestation in a blink of an eye. That’s why you should take some steps to dispose of these annoying creatures, such as:

🐀How many mice is considered an Infestation?

One mouse or two, which accidentally have gotten into your house in search of food, can’t be considered an infestation. However, if there are mice that have built a nest inside, now that’s a bit of a problem. Once they find shelter, they’ll start breeding very quickly, which can be considered an actual infestation.

🐭What scents do mice hate?

If you don’t feel very comfortable killing or capturing the pests, you can prevent them from getting inside your house in the first place. Some strong smells can be an effective way to keep them at bay. There are scents the mice simply can’t stand, so once you spread them around your place, they won’t be tempted to get inside. Some of them are: