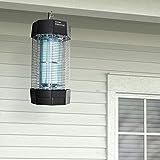 This bug zapper is one of the most powerful products on the market. As you will see in our Flowtron FC-8800 Diplomat review, it has the capabilities to cover huge areas and do so rather effectively. Before we jump to the details, here are a few words about the manufacturer. It truly shows that the product comes from a well-established and respected company.

Flowtron has started doing business in 1920, as an automobile radio manufacturer that went under the name of Armatron International. Since then, the company has shifted its focus and is currently known on a global for its outdoor products. It is essential to mention the fact that the Armatron International is the parent company of the Flowtron Outdoors Product Division, also known as simply “Flowtron”.

The Flowtron branch of the company handles everything from research, design, and manufacturing of lawn and garden products. The equipment and devices are distributed mainly to retailers in the US and Canada; however, they can be ordered from anywhere in the world.

Flowtron is Very Popular in the US!

The company’s devices are extremely popular among both homeowners as well as landscaping and exterior design experts due to their reliability and their ability to efficiently cover large areas. While Flowtron is the only branch that manufactures these products, it is quickly becoming a leading manufacturer of garden equipment.

This is mainly due to the fact that the company ensures the high quality of its products by manufacturing them exclusively in the US.

One of the most widely used pieces of equipment from Flowtron is the FC-8800 Diplomat Fly Control Device. The product has been designed to offer maximum efficiency and durability, by using a variety of technologies that all work together to create one of the most popular fly control devices that are currently on the market.

The New Design Philosophy of the Flowtron FC-8800

The design philosophy of the FC-8800 is that a fly control device should be both extremely effective as well as energy-efficient, considering the fact that it would have to be on all the time. To ensure that it can cover a vast area and do so reliably, Flowtron has used a double lure system and a modular design. This enables the device to cover a 2-acres outdoor area, as well as a 2,000 square feet indoor space. Furthermore, the industrial-grade materials used in the manufacturing process ensure that the Flowtron FC-8800 Diplomat will last for several years with a minimum amount of maintenance.

Flowtron uses two different lures to attract insects for the whole day. The first attractor is a 120-watt UV lure that can cover up to 1,200 square feet indoors and up to 2 acres outdoors. The light is continuously emitted, however, it is most effective during the night since there are no other UV light sources to distract the insects from the trap.

It is also important to mention the fact that the UV bulb does not emit light that can be perceived by the human eye. That being said, animals will be able to see it, and it may take a while for them to get used it.

The second lure used by the device is a consumable fly pheromone. Explicitly designed to attract flies, the bait is in the shape of a slow-release strip that takes 30 days to completely dissolve. One lure is included with the Flowtron Diplomat.

The pheromone strip does not have a smell that can be felt by humans or animals, so it can also be used when keeping the fly zapper indoors.

Together, the two lures make the Flowtron Diplomat utterly irresistible to most insects. The pheromones can be carried by wind and attract flies from a large area, and the UV bulb will draw in moths, mosquitoes and other insects that are attracted by light.

Flowtron has designed the FC-8800 to last for a long time. The outer shell is built from an impact-resistant plastic that can be dropped from up to 3 feet without cracking, and the internals are made from industrial-grade materials that can function for extended periods without degrading. For all intents and purposes, this model is meant to be kept on at all times.

The only two components that need regular replacing are the pheromone lures and the UV bulb. The device does come with an included pheromone strip; however, it will become ineffective after 30 days and will need replacing. These can be bought in packs of 6 from Flowtron and are easy to replace.

As for the UV bulbs, they usually last for up to 8 months of continuous use after which you will have to install a new one. Bulbs can, again, be purchased from the manufacturer and can be replaced without difficulty.

Specifications of the Flowtron FC-8800

A Powerful Bug Zapper developed for Industrial Use

Flowtron has designed the FC-8800 to be used in restaurants, retail stores, barns, stables, and other locations that may require sanitation when it comes to house and garbage flies. This, however, does not mean that it is suited for everyone. The model is a heavy-duty device that can cover a large area, but this level of effectiveness does come at the price of high-power consumption.

Pros of the Flowtron Diplomat

Cons of the Flowtron Diplomat

Overall, the Flowtron FC-8800 Fly Control Device is one of the more powerful devices of this type. The double lure system that the manufacturer has designed works great in any scenario and any season. Any kind of flying insect that is attracted to light will find the UV lightbulb irresistible and will quickly fly into the power grid.

Unlike many other similar devices, the FC-8800 is designed to cover a huge area 24/7. Also, the flytrap can be used both indoors as well as outdoors, making extremely flexible. The fact that the hum created by the power grid is too silent to hear makes it practical to hang in a hallway or the living room during the night, without worrying that it will wake up family members. Also, the Flowtron FC-8800 Diplomat does require the pheromone lure to cover large spaces; however, it can work without it, so using it is not dependent on having a supply of Fly Pheromone.

That said, just like any other electricity-based fly control device, the FC-8800 does eat up a lot of power. This may not be an issue for those who simply need a fly zapper to use it on occasion, but individuals who need a long-term solution will have to keep this aspect in mind.

A Powerful Solution for Large Areas

The FC-8800 is not designed for small spaces. While it may require a lot of power to function, the costs of keeping it plugged in at all times are worth it when considering that a single device can protect an entire yard or home. It may not be able to lure in all insects, but it will eliminate all the ones that generally disturb you, from flies to mosquitoes and moths.

Got a question or an opinion for this article? Share it with us! Cancel reply